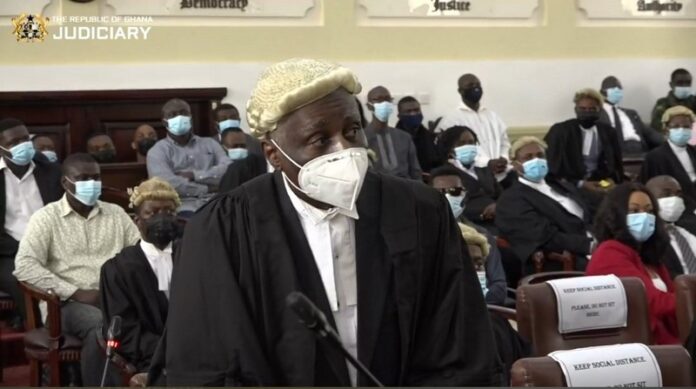 The Supreme Court has struck out portions and paragraphs of the witness statement of Rojo Mettle-Nunoo, third witness for former President John Mahama.

According to the panel chaired by the Chief Justice Kwasi Anin Yeboah, those paragraphs are struck out as having no basis in law.

Sitting has been adjourned to Monday, February 8, 2021, for EC to cross-examine the witness via zoom.

Lawyers of the Respondents in the ongoing election petition before the Supreme Court on Friday raised objections to 23 out of the 32-paragraph witness statement of Rojo Mettel Nunoo.

Mettle-Nunoo, one of the two agents in the strongroom of tye Electoral Commission (EC) is set to give evidence via zoom but portions of his witness statement has been challenged by the Respondents just before he tenders it in evidence.

He argued that those paragraphs have not been pleaded to in the petition and prayed the court to struck them out before the witness statement is tendered in evidence.

To some of the paragraphs, he argued that it was an attempt to sneak in some information on authenticity through the backdoor, an issue he pointed out has been refused earlier by the court.

Justin Amenuvor, Lead Counsel of the EC who associated himself with submissions of 2nd Respondent Counsel, only drew the court’s attention some of the available laws.

But, the court observed that he was citing from the computer, a development the Chief Justice described as unacceptable.

It was the case of the CJ that, such reference could be made through the hard copies of the Ghana Law Reports.

Counsel conceded and apologized to the bench.

Lead Counsel for the Petitoner, Mr Tsatsu Tsikata while responding to the objections went paragraph-by-paragraph as per the objections raised and responded to them.

While addressing the objections, he took turns to relate the said witness statement to the petition before the court while justifying why those paragraphs are necessary and ought to be maintained.